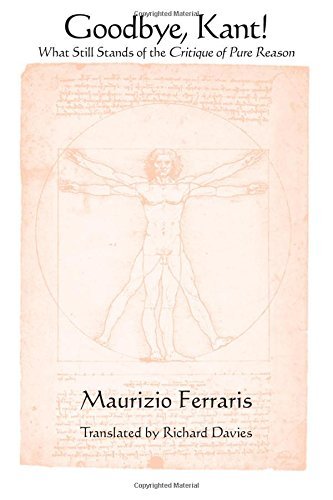 A best seller in Italy, Maurizio Ferraris's Goodbye, Kant! delivers a nontechnical, entertaining, and occasionally irreverent overview of Immanuel Kant's Critique of Pure Reason. He borrows his title from Wolfgang Becker's Goodbye Lenin!, the 2003 film about East Germany after the fall of the Berlin Wall, which depicts both relief at the passing of the Soviet era and affection for the ideals it embodied. Ferraris approaches Kant in similar spirits, demonstrating how the structure that Kant elaborates for the understanding of human knowledge can generate nostalgia for lost aspirations, while still leaving room for constructive criticism. Isolating key themes and concerns in the work, Ferraris evaluates Kant's claims relative to what science and philosophy have come to regard as the conditions for knowledge and experience in the intervening two centuries. He remains attentive to the historical context and ideals from which Kant's Critique emerged but also resolute in identifying what he sees as the limits and blind spots in the work. The result is an accessible account of a notoriously difficult book that will both provoke experts and introduce students to the work and to these important philosophical debates about the relations of experience to science.