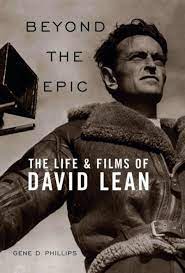 Two-time Academy Award winner Sir David Lean (1908–1991) was one of the most prominent directors of the twentieth century, responsible for the classics The Bridge on the River Kwai (1957), Lawrence of Arabia (1962), and Doctor Zhivago (1965). British-born Lean asserted himself in Hollywood as a major filmmaker with his epic storytelling and panoramic visions of history, but he started out as a talented film editor and director in Great Britain. As a result, he brought an art-house mentality to blockbuster films. Combining elements of biography and film criticism, Beyond the Epic: The Life and Films of David Lean uses screenplays and production histories to assess Lean's body of work. Author Gene D. Phillips interviews actors who worked with Lean and directors who knew him, and their comments reveal new details about the director's life and career. Phillips also explores Lean's lesser-studied films, such as The Passionate Friends (1949), Hobson's Choice (1954), and Summertime (1955). The result is an in-depth examination of the director in cultural, historical, and cinematic contexts. Lean's approach to filmmaking was far different than that of many of his contemporaries. He chose his films carefully and, as a result, directed only sixteen films in a period of more than forty years. Those films, however, have become some of the landmarks of motion-picture history. Lean is best known for his epics, but Phillips also focuses on Lean's successful adaptations of famous works of literature, including retellings of plays such as Brief Encounter (1945) and novels such as Great Expectations (1946), Oliver Twist (1948), and A Passage to India (1984). From expansive studies of war and strife to some of literature's greatest high comedies and domestic dramas, Lean imbued all of his films with his unique creative vision. Few directors can match Lean's ability to combine narrative sweep and psychological detail, and Phillips goes beyond Lean's epics to reveal this unifying characteristic in the director's body of work. Beyond the Epic is a vital assessment of a great director's artistic process and his place in the film industry.