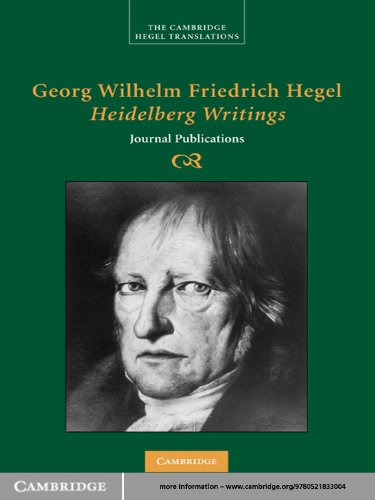 This work brings together, for the first time in English translation, Hegel's journal publications from his years in Heidelberg (1816–18), writings which have been previously either untranslated or only partially translated into English. The Heidelberg years marked Hegel's return to university teaching and represented an important transition in his life and thought. The translated texts include his important reassessment of the works of the philosopher F. H. Jacobi, whose engagement with Spinozism, especially, was of decisive significance for the philosophical development of German Idealism. They also include his most influential writing about contemporary political events, his essay on the constitutional assembly in his native Württemberg, which was written against the background of the dramatic political and social changes occurring in post-Napoleonic Germany. The translators have provided an introduction and notes that offer a scholarly commentary on the philosophical and political background of Hegel's Heidelberg writings.